WWE is the biggest wrestling promotion in the world, and kids everywhere are fascinated with its superstars. WWE offers three main shows – Raw, Smackdown and NXT.

Thanks to it being such a worldwide phenomenon, there are plenty of toys on the market for your WWE-loving children.

If you’re looking for a WWE-themed toy, here are 20 options that are sure to make a (frog) splash as soon as they’re opened.

Who’s hotter in WWE right now than the tribal chief himself – Roman Reigns?! This action figure is ideal for any child who enjoys watching The Bloodline every Friday on Smackdown.

This kit includes everything your child needs to play with the head of the table! 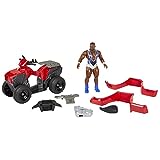 While Big E might be out of action, for now, that doesn’t mean that kids won’t love this kit featuring an action figure of him!

The six breakaway pieces ensure that your child’s match is believable and super fun.

The ATV offers spinning handlebars to deliver insane kicks, and you can even launch the opponent high up into the air!

Any kid who loves WWE needs a championship belt. After all, they are the champions in their own matches.

This is a replica of the WWE championship belt, but it is small enough to fit comfortably around the waist of any child.

The stakes for your at-home matches just got higher! Who will be crowned the champion of your family? (Hint: it’s always the kids).

Bianca Belair is one of the hottest superstars in WWE right now, and she’s also the Raw women’s champion.

If you have a wrestling lover in your home, perhaps a 6-inch action figure of one of the greatest female wrestlers would make a lovely gift.

You’ll get the figure, Bianca’s signature jacket and glasses, and two pairs of swappable hands. 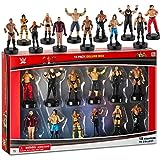 Does your child love arts and crafts almost as much as they love WWE? These stampers are the ideal gift then. You don’t even need to buy ink – the stamps are already full of ink and ready to use.

You’ll get the likes of The Undertaker, Becky Lynch, and many more. Plus, your child can use the stampers as mini action figures for pretend play!

While Goldberg might not be the Universal champion anymore, this figure is a great gift for kids. Goldberg only appears in WWE once or twice a year, so seeing him is always a big deal.

However, you can gift your child this action figure and make the wait for Goldberg’s return much easier! This figure comes with a Universal title belt and two swappable hands.

Every WWE lover needs their own play ring, complete with a spring-loaded mat to make all of the bumps believable!

This ring comes with everything you need to set up your wrestling match, including banners for the sides to choose which show it’s on.

The banners include Raw, Smackdown, Wrestlemania, and Summerslam. Get ready to watch some seriously good matches! 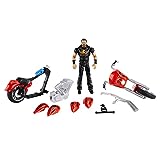 With nine breakaway parts, this toy motorcycle is a great gift for WWE lovers. Drive or destroy with this fun toy, featuring a battle-damage headlight, wheelie abilities, and much more.

Plus, you’ll get a free Drew McIntyre action figure for free. Don’t worry though, any action figure can be used with this WWE weapon!

War Games is one of the biggest pay-per-views that NXT holds, and they’ve just recently brought it to the main show’s PPVs!

Anyone who enjoys WWE will love the premise of War Games, and this toy allows them to choreograph their own matches.

Featuring two rings with one cage around them, this kit comes with two ladders, a chair, a table, and even more weapons. The cage can break, too, giving your child the chance to make a really fun game out of this toy. 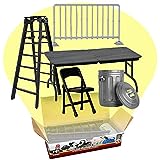 Who doesn’t love a no holds barred match? Kids love weapons being used in WWE – ‘We want tables!’ ring any bells?

If they already have the figures and rings to make a match, why not get them a set of weapons to make the matches even more lethal?

You’ll get a barrier, ladder, breakaway table, chair, and trash can with a removable lid – all beloved weapons seen in WWE! 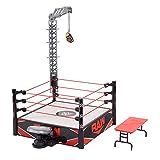 Next we have another ring playset for a great price. It comes with a springboard launcher (make sure all valuables are out of the fly zone!), a crane, and a title belt to heighten the stakes.

It also features a breakaway table and customizable ropes.

There are also 26 authentic sounds to be played throughout the match from randomized referees! You’ll be wondering whether you’re watching a real WWE match with this toy.

It comes with a rolling bed and eight breakaway parts to make a great showdown.

13. WWE Money In The Bank Briefcase

WWE Money in The Bank Briefcase
$39.99
Buy on Amazon

Does your child love the Money in the Bank PPV? Then why not give them their very own briefcase that gives them the right to challenge the champ to a title belt match whenever they please?

If you already have a family title belt, adding a MITB briefcase could lead to endless fun. Plus, the inside of the case works as a holder for your child’s favorite figures!

Remember playing UNO when you were young? Did you know that there is also a WWE UNO card game specifically for WWE lovers?

This is a great gift for any child who enjoys spending time with the family and WWE.

If it’s one wrestler that every kid loves, it’s The Rock. This figure set comes with a car featuring eight breakaway parts and a 6-inch basic action figure. There is no cooler gift than this one!

Plus, your kid will finally be able to watch The Rock in a modern wrestling match. 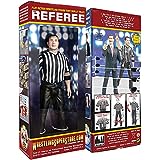 Every good match needs a referee, and this one is the best. It counts and talks during the match, just like you see WWE referees doing.

While this isn’t technically a WWE-specific referee, it is still a great toy for anyone who likes to create their own extensive matches.

This Rig Toy Truck is great for anyone who loves destruction in their wrestling matches. Who doesn’t want to see a 300-pound wrestler (figure) fly through the air after being swung at with a wrecking ball?

This toy comes with 11 breakaway parts, wheels, a ladder, and more.

Collect WWE Wrekkin - slamcycle playset Featuring The Undertaker! Wreck The Motorcycle and The Competition with The WWE Wrekkin' SlamCycle!
$37.05
Buy on Amazon

The Undertaker is another popular WWE legend that kids love. After his retirement a few years ago, this toy will be even more beloved by anyone who receives it.

The motorcycle toy features nine breakaway pieces to turn any match into carnage. 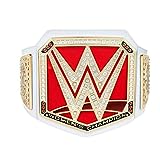 This women’s Raw championship replica is great for any young girl who loves wrestling. It’s well made, light enough to carry, and will make your child stand out from the crowd as the winner they are! 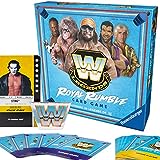 Finally, this card game is fun for all of the family. Featuring 30 WWE legends like Jake ‘The Snake’ Roberts, Macho Man Randy Savage, and Andre The Giant, you’ll be blasted back in time to early WWE days.

Walk through a Royal Rumble match and see who wins with the easy-to-follow instructions and signature move cards.

This game is fun for all of the family, and reviewers even said that their kids love making up their own rules for the game and playing for hours.

Thanks for reading our list of 20 WWE toys that your kid will love. Being such big wrestling fans ourselves, it’s difficult to pick our favorites!

Always check to see what your kid has before buying them a new gift. No one wants two of the same figure!

Younger kids will love the figures and ring playsets so that they can make their own matches.

Older kids might enjoy the card games more, although they’ll still appreciate the playsets. Replica belts are fun for all ages!

link to How To Build A Fort

Fort building is a rite of passage for many children, and whether it is made from a blanket or something more sophisticated like wood and twigs, a fort is perfect for hiding away, playing pretend, or...

STEM subjects have become more and more important in schools. Seriously, I feel like my older kids come home with reams and reams of STEM homework every day. I don’t know where to...